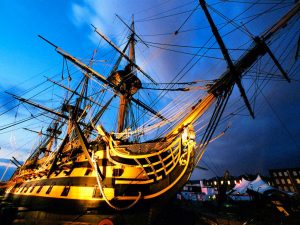 HMS VICTORY is the oldest commissioned warship in the world and like other commissioned vessels of the Royal Navy, she has personnel onboard all year round for the safety and security of the vessel.  In order to enhance that system, Autoclock Systems were contacted and suggested use of the “Cogard 3000″ system with software.

The crew use a lightweight data collector as they patrol the ship to touch checkpoints situated throughout the vessel, this ensures a date, time and location is collected with a high level of accuracy.  The stored information from the data collector is transferred to the CoGard software and exported to a spread sheet so that information can be verified and shared with other security measures.

The Commanding Officer of HMS VICTORY, Lt Cdr DJ ‘Oscar’ Whild RN said “I introduced the Cogard 3000 system shortly after I took command of HMS VICTORY in 2008.  The system gives me added confidence that a complete check of the ship is being undertaken on a very regular basis.  It also protects the personnel using the system, in that they can prove to me without any doubt that they have carried out their duties effectively whilst the ship is closed to the public.” 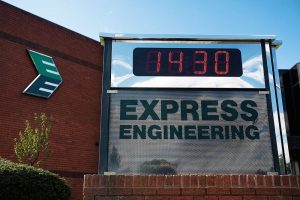 The countdown to the replacement of one of Gateshead’s most used clocks has begun. With Father Time having finally caught up with the old timepiece outside Express Engineering’s Team Valley operation, the company has called in Newcastle based Autoclock Systems.

After over 20 years without slumbering the old alfresco timepiece, used by hundreds of passers by every day, began sticking and each time it froze the Express switchboard lit up with callers ringing to report the fault. So the time honoured services of Paul Stuart, clock engineer at Autoclock Systems Limited who fitted the original back in 1988, were commissioned. He has installed a new state of the art clock outside the Kingsway premises, complete with GPS antenna which assures 100% accuracy 100% of the time. And it’s out with the old roll over style and in with the new, red, LED lights, which automatically alters the brightness of the display to be visible when it’s bright and avoid glare when it’s darker.

Managing director with Express Engineering, Nigel Davison, said:  “We didn’t realise the role our clock has played in so many people’s day to day routines on the Team Valley until it broke down.  Having established that the old clock cannot be fixed we’re returning with haste to our timely responsibilities.” Jason Osborne, Sales Consultant with Autoclock Systems Limited, added: “Express Engineering is one of our longest standing clients and the clock has at times been a reference for our work, as most people who know the Team Valley are familiar with it.  The replacement has a lot to live up to but we’re confident it will stand the test of time.” 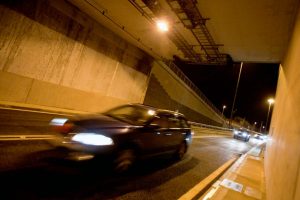 The iconic Tyne Tunnel has been a customer of Autoclock Systems Ltd for over 15 years.

After the announcement to build a second tunnel along with the change in management as “TT2” took over at the tunnels site, they required a more up to date system to control the changes in staff and shift patterns for over 100 employees. The TT2 IT department were highly involved with the installation and after our recommendations they decide to install the Kelio time and attendance software together with two proximity clocking terminals.

The terminals use the same Paxton key fob technology used in their access control system, so employees carry only one fob. The system is a key management tool capturing employee start and end times for each working pattern, calculating working hours and overtime. Together with our service and system reliability they are very pleased with the new system. As the new tunnel progresses they may require additional features but having chosen the Kelio software this will allow them the flexibility to expand the software with the introduction of additional software modules.